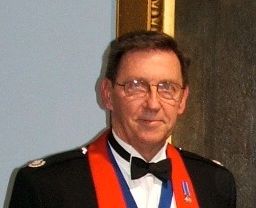 Patrick Cox has lived an interesting and varied life. Born in Cape Town, South Africa just after the end of WW2, he grew up in a place called East London, a small river harbour on the Eastern Cape coast – not the marginally better known city on a bigger river in the Northern Hemisphere. Educated, or so it is claimed, at the Selborne Primary and College in East London, he was introduced to sailing as a sport at an early age and still enjoys ‘messing about in boats’ when anyone will let him.

After trying a variety of potential careers, including banking, sales and administration, and even exploring ordination, he broke with family wishes – and joined the Fire Service in Port Elizabeth. In this, at least, he was following a family tradition of service. His father served in the Royal Navy, his grandfathers in the Army and even his great grandfathers in the Army or Navy. After a somewhat hesitant start though, he made this his life’s career – to quote; “It was almost a vocation, really. I just enjoyed being able to help people who really appreciated our efforts.”

He describes his career, which saw him work as a firefighter, operational officer and eventually fire safety specialist and training instructor, as “Thirty-six years of sweat, adrenalin, scary stuff, some tears, some frustrations and a whole lot of laughter.” He says, “I made some superb friends, learned a lot about life I didn’t know, some things I probably didn’t want to know – and the importance of belonging to a real team, with real people while doing something you really do enjoy doing 24/7.” In the process he built a family, with three adult children and now three granddaughters all of whom make him immensely proud.

His first forays into writing were in the technical field – he is still writing textbooks and study guides – while serving as Training Officer for a major city Fire and Emergency Service in South Africa. In this capacity he wrote a number of study guides for the service’s Recruit Training Programme and for several other organizations including the Sea Cadets and the Boy Scouts. As Fire Safety Officer he was tasked with writing Regulations for Flammable Liquid Storage and a Minute on the storage of explosives in between drafting Standard Operating Procedures, Specifications and all the other technical ‘stuff’ the work demanded.

Moving to the UK to continue his career in 1988, he found himself at the Fire Service College in 1992 as an Instructor/Tutor and spent the last fourteen years of his career there. He describes this as “an opportunity to learn, to branch out in new directions and above all to share my own experience with others – and learn from theirs.” They were challenging years, but very fulfilling. Shortly after joining the College staff, his first book was published by the Institution of Fire Engineers www.ife.org.uk – a reference work titled “Marine Fire Studies.” It addresses the fire safety and fire fighting requirements for ships and is aimed at those studying for the Graduate and Membership Diplomas of the Institution. A lifelong ambition was also fulfilled in 1999 when he was awarded the degree of Bachelor of Science by the London South Bank University (LSU) and topped this in 2003 with a Master of Arts awarded by Coventry University.

His career has taken him to the Philippines, the Middle East, including Libya, Kuwait, Qatar, Bahrain, Iran, and further east to Australia, Indonesia, Thailand, and Kazahkstan. Closer to home he has also taught or delivered conference papers in Poland, Romania, Serbia, Ghana, Jamaica and the US. As he says, “I never expected to do much world travel. After all you joined the Royal Navy for that – at least my father did.” It is something of joke in his family that he has visited more places in the world than his naval service father, “some of them places he spent time trying to blow up.”

The obvious question to ask someone with this background is – why take up writing? And why this mix of genres?

The answer is an intriguing one. “It is something I wanted to do when I was at school, but life had other plans. The writing I did in my ultimate career has allowed me to polish my ability in this art and I do enjoy telling a good story. The mix of genres came about because I love a good historical tale – as close to the facts as possible – and I enjoy the speculative futures offered by science fiction. So, what does happen when you put some people from the past into a possible future in which many of the skills to ‘fossils’ may have, are forgotten? It’s a lot of fun exploring that on it’s own.”

The inspiration for the original story came from his grandfather, a man who was a major influence in his life. The original Henry Nelson Heron ran away at the age of fifteen, to join the Army in WW1. He and his best friend were among the casualties on the first day of the Somme battles which saw the 36th Ulster Division almost wiped out. They survived and went on to make new lives for themselves in a newly unified South Africa. Both were men of broad knowledge – though their formal education was curtailed – and made use of their skills and knowledge in furthering their ambitions. Knowing men like these and knowing how many of the skills they had were being ‘lost’ led to the idea for his first novel. The overall story has grown from there!

“Harry Heron; Midshipman's Journey” introduces “Harry” Henry Nelson-Heron as a Midshipman and Ferghal O’Connor, Boy Seaman, aboard the 74 gun ship of the line, HMS Spartan. The story is a ‘rite of passage’ for the boys, showing how they gain the skills and knowledge they will put too good use in the far future. It is followed by Harry Heron; Into the Unknown in which Harry and his friends find themselves thrust four hundred years into a future they could not have imagined. The series will continues with the next stage of their adventures in Harry Heron; No Quarter and Harry Heron; Savage Fugitive with the next, Harry Heron: Awakening Threat, published in 2019.

The sixth is now on sale titled Harry Heron; Hope Transcends published July 2020. Nor is Science Fiction his only interest. His love of history has led to his writing A Baltic Affair, a Napoleonic war story set in and around the Baltic trade. This has been followed by a story set in the Thames in the 1830s titled Limehouse Boys, and the response to these has encouraged him to explore this genre more fully. In a further delve into the past, this time the distant past, his fictional biography of St Patrick, Magnus Patricius - The remarkable life of St Patrick, the man - is his tribute to a truly remarkable historic figure. Using the Confessio of Magnus Succatus Patricius (his real name), Cox has built a story around the bare bones of what St Patrick himself told us of his life.

What does Patrick Cox think is the most flattering review he has received? “Definitely the one that suggested my Harry Heron story was a case of ‘Asimov meets Hornblower.’ Since C S Forrester was one of my earliest favourites and Isaac Asimov has always been one of my favourite scifi authors, what greater compliment could I get?”

Asked what else he plans to write, his answer was enthusiastic. “I’ve some great ideas for purely historical stories – based on real life and real people. There are plenty more adventures for Harry and Ferghal to explore as I wrote above.” Current projects, though, include some technical articles commissioned by a professional journal and a professional Guide to Fire and Explosion Investigation for the Institution of Fire Engineers. “I agree with Terry Pratchett – ‘Writing is the most fun you can have on your own.’ Even writing the technical stuff is fun – and a challenge to get it just right.”

Patrick has this webpage and a second for his 'historically set' books at Saints, Sinners and Survivors and on Facebook http://www.facebook.com/ .

Speaking of ‘faith’ – he was, until he moved to live in Germany, a ‘Reader’ – a Licenced Minister, rather than an ‘ordained’ one – on the ministry team at Tewkesbury Abbey and served for four years as one of the Abbey’s Church Wardens. “One of my future projects is to try and compile a book which includes some of my best received sermons – something I do think there is room for in literature. There are a lot of very learned tracts out there, but I think I can share some of my faith with people, like myself, who don’t have degrees in Theology or Philosophy, and yet want to ‘grow’ in their understanding of their faith. Hopefully I can supply something that will help.”

Talking to him, one quickly realizes that Patrick G Cox is a man of many parts and many interests. “I’ve been lucky. I’ve had a great career, good friends, some superb teachers – and a grandfather whose interest in everything he encountered inspired me to look at things with a more open mind than perhaps I would have done in other circumstances. And some of the experiences have coloured my characters and my stories.” 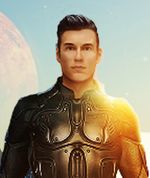